Pharmaceutical innovations provide significant opportunities for patients; however, prescription drug costs continue to skyrocket, which creates affordability challenges and ultimately results in limited access for many patients. A January 2021 RAND Corporation report found that United States drug prices were 256% higher than those in the 32 comparison countries combined.

The Cost Benchmark vs. Health Insurance Premiums: What’s the Difference?

The COVID-19 pandemic has brought to the forefront the long-standing racial and ethnic disparities that exist in health care. Over the past year, we have witnessed the harm that inequities have caused to communities of color and vulnerable populations, not only in Massachusetts but also across the country.

The Premium Dollar: How Does a Health Plan Spend the Money it Collects?

The Center for Health Information and Analysis’s 2019 Annual Report on the Performance of the Massachusetts Health Care System found that Massachusetts total health care expenditures increased by 3.1 percent from 2017 to 2018, representing an increase in line with the Commonwealth’s Cost Growth Benchmark. While the report found that the growth in premiums differed from the growth in total health care expenditures, it is important to understand the key differences between how the development of health plan premiums differs from the calculation of the Cost Growth Benchmark.

Massachusetts has long been a leader in comprehensive health care coverage for its residents, boasting the highest rate of insured individuals in the nation at nearly 98%. Health plans in Massachusetts establish networks of physicians, hospitals and other types of providers in order to ensure that members have access to high-quality providers who can best meet their medical needs. To achieve cost savings, health plans enter into contracts with these providers, hoping to drive significant volume to them in exchange for lower contracted rates.

This report evaluates the financial health of Massachusetts hospitals to determine (1) which hospitals had the least financial stability and (2) whether hospitals’ payment levels correlated with hospitals’ financial status. The report concludes that, based on the available data, the 27 hospitals that have an Relative Price (RP) below 90 percent are not significantly less profitable or less financially stable than hospitals with an RP above 90 percent.

Recently, the Center for Health Information and Analysis (CHIA) released its 2018 Annual Report on the Performance of the Massachusetts Health Care System. Its initial analysis of health care spending in 2017 concluded that costs grew by just 1.6 percent from 2016 to 2017, less than the growth of 2.8 percent in 2016, and a full two percentage points below the Commonwealth’s health care cost growth benchmark of 3.6 percent established as part of the state’s 2012 Payment Reform law (Chapter 224 of the Acts of 2012). 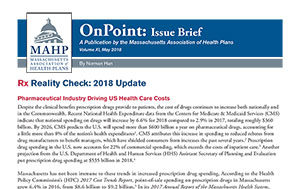 Despite the clinical benefits prescription drugs provide to patients, the cost of drugs continues to increase both nationally and in the Commonwealth. Recent National Health Expenditure data from the Centers for Medicare & Medicaid Services (CMS) indicate that national spending on drugs will increase by 6.6% for 2018 compared to 2.9% in 2017, totaling roughly $360 billion. By 2026, CMS predicts the U.S. will spend more than $600 billion a year on pharmaceutical drugs, accounting for a little more than 8% of the nation’s health expenditures. 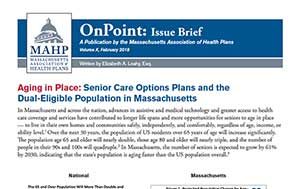 In Massachusetts and across the nation, advances in assistive and medical technology and greater access to health care coverage and services have contributed to longer life spans and more opportunities for seniors to age in place — to live in their own homes and communities safely, independently, and comfortably, regardless of age, income, or ability level. Over the next 30 years, the population of US residents over 65 years of age will increase significantly. 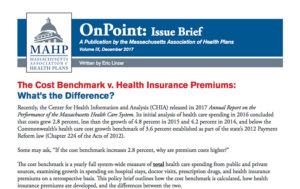 Recently, the Center for Health Information and Analysis (CHIA) released its 2017 Annual Report on the Performance of the Massachusetts Health Care System. Its initial analysis of health care spending in 2016 concluded that costs grew 2.8 percent, less than the growth of 4.8 percent in 2015 and 4.2 percent in 2014, and below the Commonwealth’s health care cost growth benchmark of 3.6 percent established as part of the state’s 2012 Payment Reform law (Chapter 224 of the Acts of 2012). Some may ask, “If the cost benchmark increases 2.8 percent, why are premium costs higher?”

MAHP OnPoint: How Are Premiums Developed for Individuals and Small Groups?

The policy brief discusses how premiums are developed for individuals and small groups, examining the key factors that health plans consider in developing premiums, and provides an overview of how rate increases may vary across the marketplace.

MAHP OnPoint: Examining the Effect of a Repeal of the ACA on the MA Health Care Market: Immediate Priorities for the Marketplace

While the state’s landmark health reform law and other vital provisions in statute provide Massachusetts with the ability to maintain the gains in coverage realized under state and federal health reform, much is contingent on what provisions are ultimately repealed or changed. The enclosed brief discusses the immediate priorities for the marketplace and outlines a series of measures for maintaining market stability and universal health coverage in the Commonwealth.

The policy brief examines the field of predictive analytics and whether these tools can be used as a means to help identify children in need of assistance and help in protecting our state’s most vulnerable population.

Health plans are subject to stringent standards in the coverage of behavioral health and substance use disorder conditions and other medical conditions. The policy brief examines state and federal mental health parity laws and regulations, providing an overview of what parity is and address misconceptions in the applicability, oversight, and enforcement of mental health parity.

MAHP Report on Expanded Use of SCOs 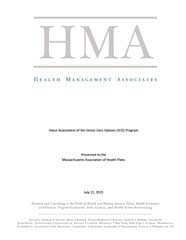 The white paper examines the differences between the benefits the Senior Care Option (SCO) plans offer and the services provided to dual-eligible individuals who receive care in the fee-for-service Medicare and Medicaid programs. The report concludes that the state could generate significant savings, offer enhanced benefits, and provide a simpler, more convenient process for providers by enrolling all eligible low-income seniors in one of the state’s five SCOs.

The Massachusetts Association of Health Plans